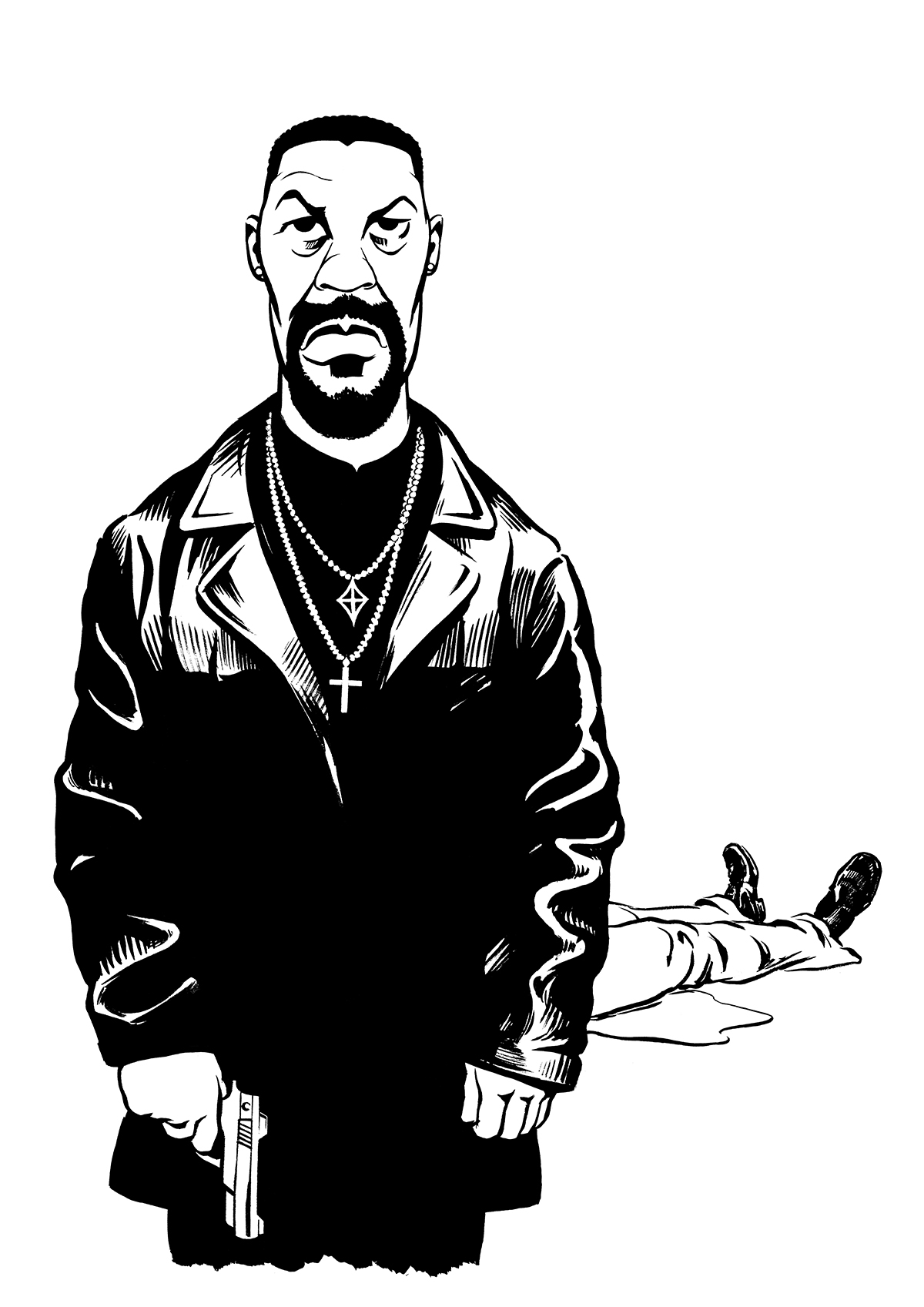 I was surprised yesterday, to discover that one of the pictures in my current exhibition at a local Business Center had been removed at the behest of a gentleman who had taken offense to various images in the show, particularly one of a topless Kate Moss (see above).

The lady in charge who found herself having to defend the images had, at first, assumed the man in question to be joking, but was stunned by the dawning realisation that he was deadly serious, and wanted the pictures in question taken down. She valiantly argued that as a woman and one who considered herself to be fairly conventional in her tastes, she found nothing offensive in them. Furthermore, the likenesses depicted depended on the characters being shown in familiar guise. Needless to say, this eloquent defense was to no avail, the complainant prevailed and the worst offender was duly removed from display. It should be noted that the gentleman I refer to is a leaseholder of office space at the business center and as such, the administrators would have felt obliged to consider his opinions carefully.

He also took exception to what he considered a stereo-typically racist depiction of a black man holding a gun, (a caricature of Denzel Washington in the film Training Day).

On reflection, this grates. This po-faced insistence that his opinion is more important and insightful than anyone else’s; that his particular aesthetic sensibility should enjoy precedence over others and as such, should result in the removal of pictures from public display. These are not assumptions on my part. That is exactly what he is asserting. Strange to say that he has every right to do so and may very well be correct! But– in the absence of any reasoned argument in support of his views, his opinions should count for nothing; that is, until they are put to and withstand the question. Moreover, I would argue that they are not really reasoned opinions at all, but feelings; and as far as he is concerned, his feelings are inviolable and therefore unchallengeable.

Nevertheless, the mentality of this particular gentleman is of some professional interest to me, not least because he is representative of countless haughty opportunists who seek to impose severe restrictions on freedom of expression in the name of what might be termed standards of decency, but could equally be called challenging hate speech or any other conveniently vague label. If he hates seeing anything containing nudity or relating even indirectly to amorous congress, it is because he thinks there is something sacred in it. This shows that he is a sensualist, although he hasn’t the insight to see it, because when a man considers something sacred he does quite a lot of thinking about it. For my part I would argue, offensive images are just the scum on the surface of my mind, which is skimmed off by the act of drawing them, though he would doubtless dispute that claim.

It is conventional these days for those who take offense to claim that they do so on behalf of others whose interests motivate their concern. This is usually a facade. Their lazy insistence that others should bend in acquiescence to their will is mostly a petty power-grab and nothing more. Orthodox professional complainers know all too well the moral codes they like to think they abide by, are hardly ever called into question; their confidence supported by the mistaken assumption, underlying everything, that the offended are honest, well-intentioned, reasonable and infallible.

Apart from the occasional bout of whining or a venomous drawing, I don’t react to the hundreds of things which annoy and offend me every single day. Where would you start? Who would you hold to account? All you can do is to hold these things in contempt and struggle to rise above and beyond all that.

These images are caricatures and, as such, are meant to be sardonic and vigorous, witty and nuanced not serious and charming. It would be deluded to expect otherwise.

His opinions are just assumptions, with no sure basis. Where he sees a damaging, stereotypical portrayal of a black killer with a gun, I see Denzel Washington, the black man in question, playing the role of a psychotic, murderous, crooked cop in the film Training Day a role Denzel Washington chose to play. It quickly becomes absurd. Is Denzel Washington a racist for accepting the role? Is the Academy of Motion Pictures racist for awarding Washington the best actor Oscar for the same role? Is he planning to write to Warner Bros to insist the film be removed from circulation? Is he going to protest outside the National Gallery until all the Botticelli’s are removed? No, he would never attack what he considers high art, which of course, mine ain’t. What he sees when he looks at mine is a soft target.

Change is in the air though. More and more people are growing weary of feeling compelled to modify their speech and behaviour in order to appease the virtue signalers and perpetually offended. The more I think about it, the more I think I should perhaps consider the complaint a backhanded compliment, after all, doesn’t the complaint implicitly acknowledge that the images have some power? Hey- ho. Anyway, judge for yourself.